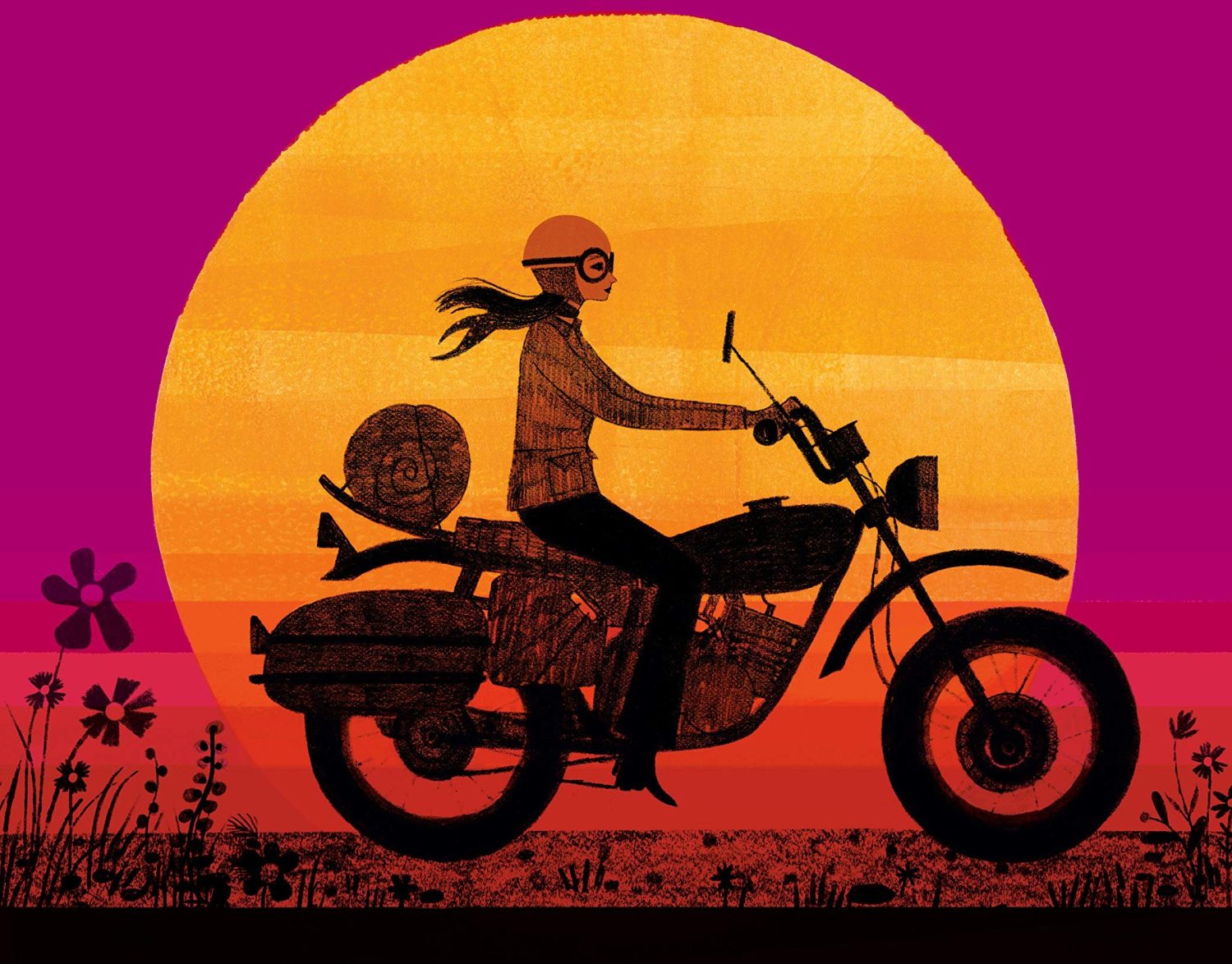 Every March I enjoy the opportunity to read and share excellent biographies of women from around the world and across time who have been influential in an extraordinary variety of ways.

And every February my Black History posts feature powerful stories of lives that enrich my soul.

Yet so many phenomenal biographies keep being published that I never get the time to share!
So beginning this week on Orange Marmalade I’m hosting a
biography bonanza!
Acquaint yourselves with a rich collection of human beings well worth knowing —
folks from around the globe, some famous, some lesser-known,
all with lives marked by lifting up, creating, restoring,
inventing, imagining, caring, discovering, persevering.

There will be a new batch each of the next four weeks
so please stop by
and make some discoveries of your own! 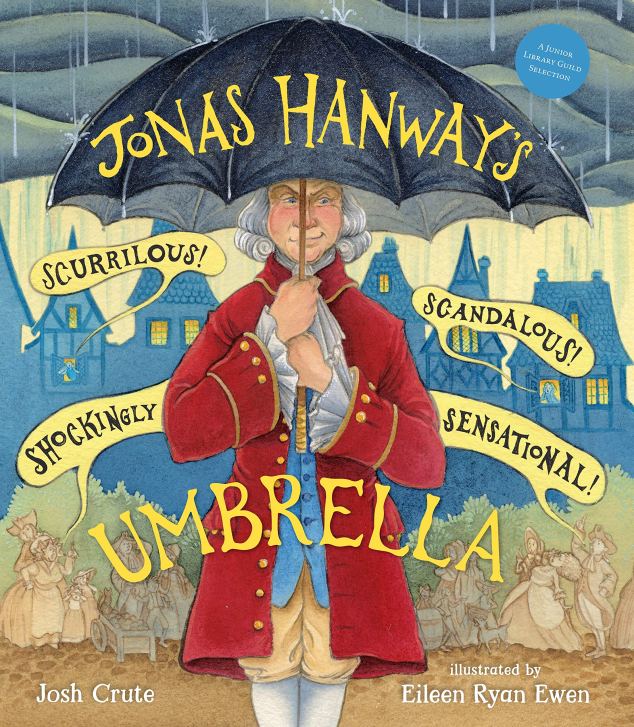 London and those black umbrellas go together like Paris and cafés in my mind, but it certainly wasn’t always this way! 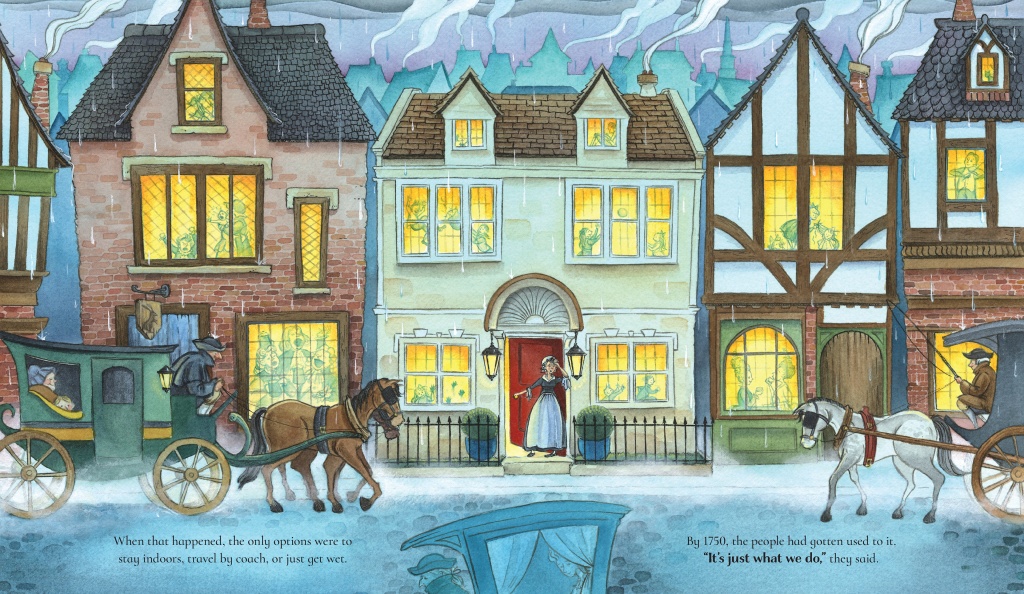 Back in the 1750s it was downright shocking for an English gentleman to be seen carrying an– egads! — umbrella! If you were any sort of anybody you simply stayed indoors when the rain fell or took a coach for heaven’s sake. Sure, women and plebeians could hoist a bumbershoot if needs must, and perhaps those awful Frenchmen might stoop to such degradation, but an English gentleman with an umbrella?! Never! 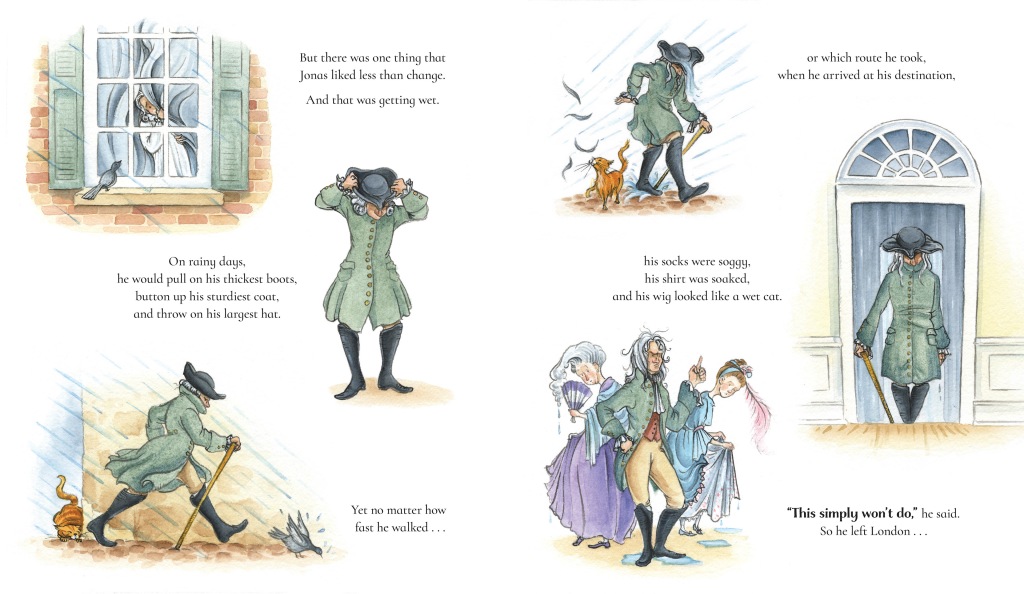 Until Jonas Hanway had had quite enough of such nonsense and set about reversing the fashion singlehandedly. Read his story in this lively, humorous, gladsome account. Delightful illustration work and page formatting add immensely to the fun for ages 4 and up! Digging for Words: José Alberto Gutiérrez and the Library He Built
written by Angela Burke Kunkel, illustrated by Paola Escobar
published in 2020 by Schwartz & Wade Books

José Gutiérrez worked for many years as a trash collector in Bogotá, Columbia. This book unveils another, magnificent aspect of his life’s work which originated, quite surprisingly, from that job.

Although he had to leave school at a young age, José grew up with a love of reading. One day as he completed his garbage route, he spied a book in the rubbish — Anna Karenina, by Leo Tolstoy. Instead of dumping it in the trash heap, José kept it and read it again, and again, and again. Soon he discovered more books in the trash. Who knew trash collecting could provide such treasure! 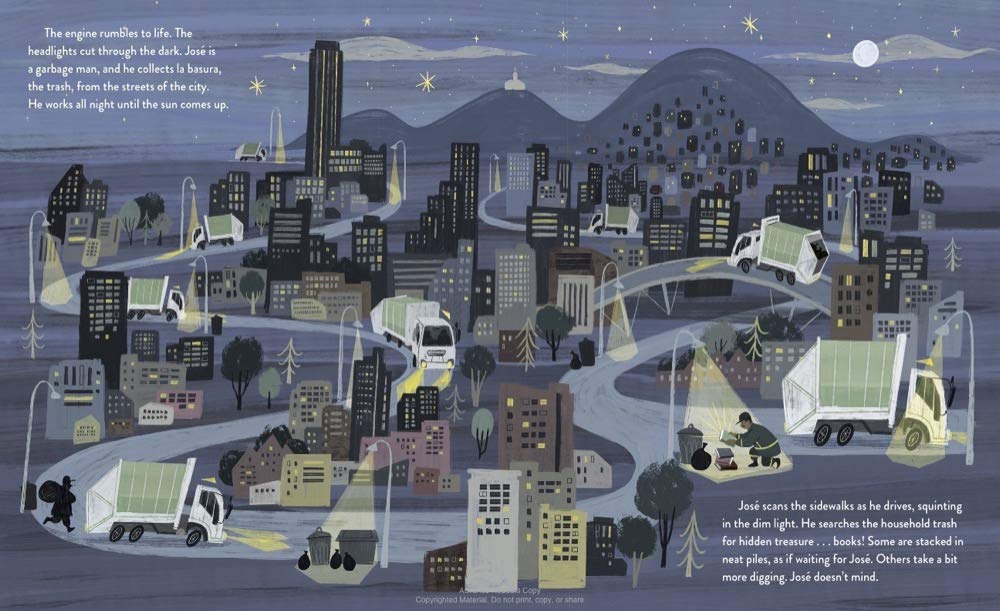 José realized that many others in his barrio would appreciate these books as well, since there was no library there. Thus he began his mighty collection of books and turned them into a paradise for his neighbors — a lending library. This inspiring story will warm the hearts of those ages 4 and older and perhaps spark some ideas for goodwill in other neighborhoods. An Author’s Note tells more and includes photos of José and his library. Above the Rim: How Elgin Baylor Changed Basketball
written by Jen Bryant, illustrated by Frank Morrison
published in 2020 by Abrams Books for Young Readers

Elgin Baylor began playing basketball at age 14 when in his steamy, hot, Washington, D.C. neighborhood, a hoop was finally put up that wasn’t for whites only. From the beginning the way he could leap, defy gravity, hang in the air as he put up his shot, astounded all who saw him. These moves were untaught, not imitations of what was happening on courts elsewhere. It was all Elgin.

Baylor moved through the basketball ranks in the 1950s when the Civil Rights movement was just beginning to spark. He joined the Minneapolis Lakers in 1958 and helped ignite the first glimmers of the activism the NBA and WNBA are known for.

Baylor changed the way b-ball is played both on and off the court. Witness his dramatic athleticism and courageous stance in this fantastic book, pounding with the vibrant energy Frank Morrison packs into all his artwork. A boss choice for ages 6 and up. 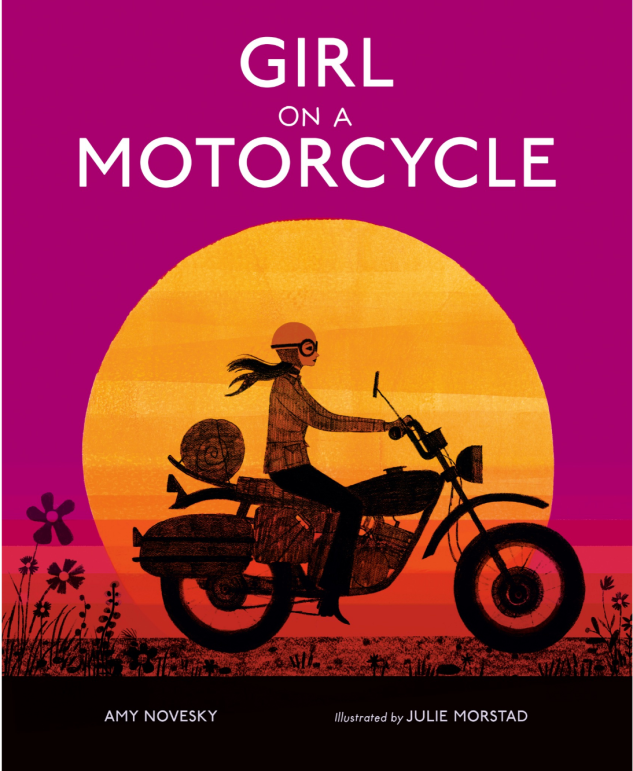 Girl on a Motorcycle, written by Amy Novesky, illustrated by Julie Morstad
published in 2020 by Viking

In 1972, a young woman named Anne-France Dautheville packed her bag, climbed on her motorcycle, and drove out of Paris into a life of exploration and adventure. A traveler curious about the world, a writer looking for the idiosyncrasies and commonalities of people in far-flung places, she became the first woman to motorcycle her way around the globe, spending a decade on the road with her bike. This book is inspired by Ms. Dautheville’s life and journeys. It is an elegant, romantic, and utterly captivating account. Her conclusion after rubbing shoulders with diverse populations in scattered regions was that the world was full of beauty and goodness. We wall ourselves off from one another to our detriment, and our expectations –whether we are suspicious of one another or optimistic about one another — deeply impact what we find. 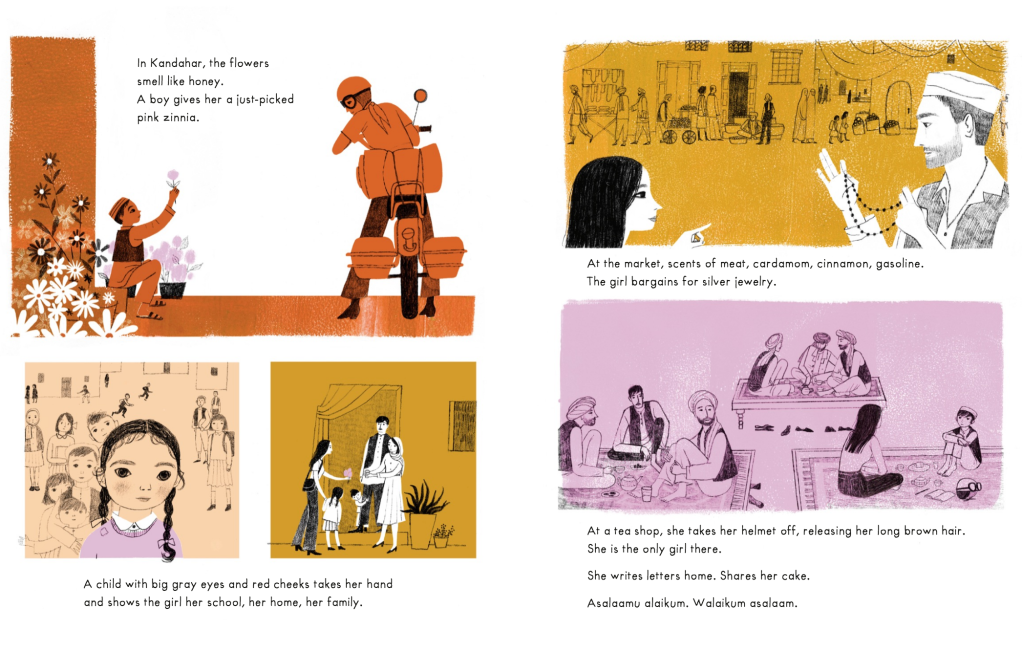 Julie Morstad’s artwork here is exquisite as always, capturing Anne-France’s classic style, as well as the valleys, vistas, and intriguing locales she visited, with a nostalgic 70s vibe. I am in love with this book, perhaps partly because it reverberates with the kinds of dreams I relished as a young woman. It’s a gorgeous, inspiring choice for ages 9 through adult. 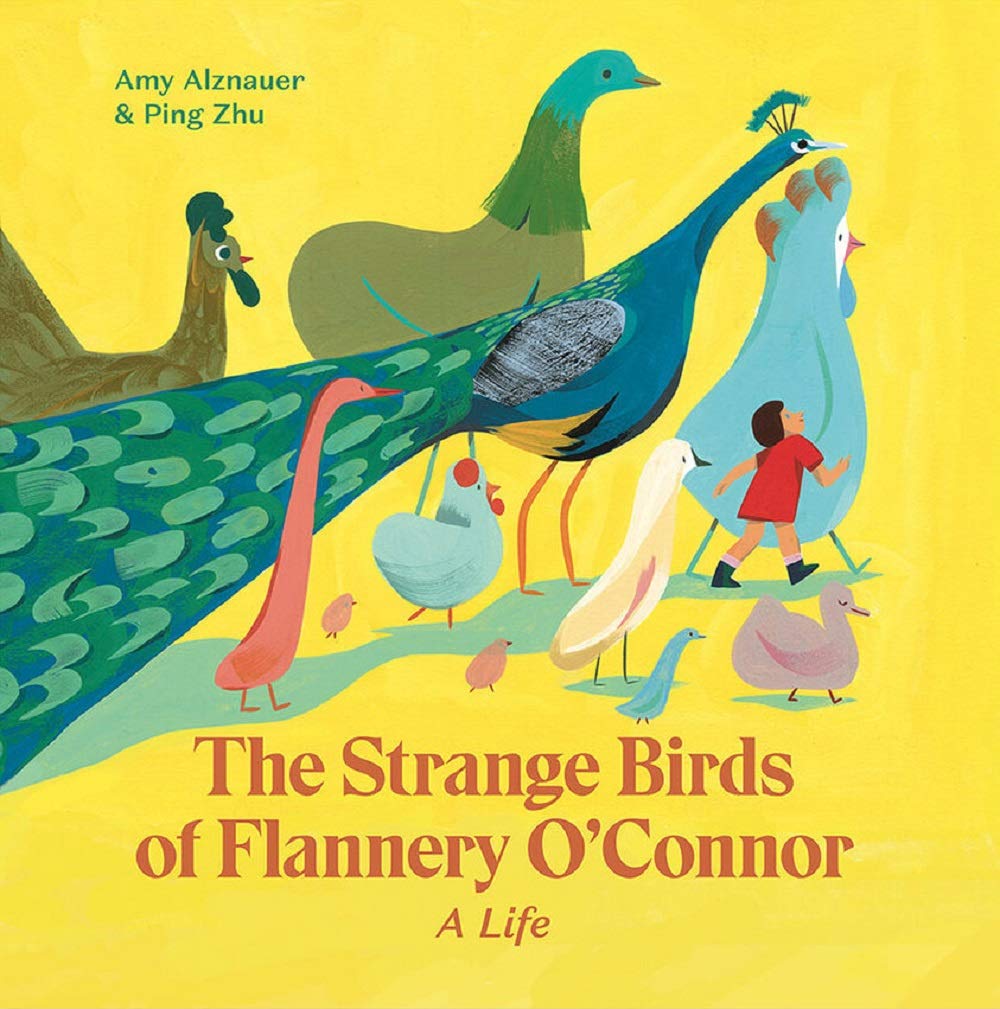 The Strange Birds of Flannery O’Connor: A Life
written by Amy Alznauer, illustrated by Ping Zhu
published in 2020 by Enchanted Lion

Just look at that cover. Its gorgeous, lemon-zest-yellow; strutting, turquoise chickens; and hearty, extra-large sized promise that something wondrous is about to unfold in these pages. That something is Flannery O’Connor, a writer who met life head-on with quirk, color, humor, ferocity, and hope. Meet her as a child agog over chickens, a child with audacity, imagination, and pigeon toes. Waltz into a world of poultry, the odder the better, adorned in “white piqué coats and lace collars” courtesy of Flannery. See her fizz keep its bubble even when grief fills up her heart and watch her infuse her stories with all the strangeness and sorrow and wonder and glory that are true elements of our world. 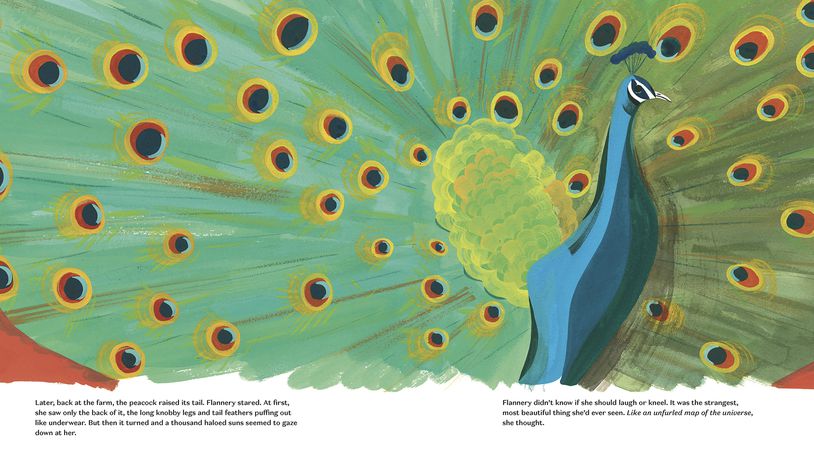 Flannery O’Connor broke the mold, stared down the world, refused to conform, kept being dazzled by birds, and persisted in hope throughout her far-too-short life, gifting the world with stories to take us by the collar and make us look, too. This outstanding biography echoes her life in text and in exuberant, raucous color and vitality. I recommend it for adults, and for children ages 7 or 8 and older.

Do come back next week for another batch of interesting folks.
Want more biographies?
There are well over 400 in my Biography list here with links to my reviews.
Don’t want to miss a post? Subscribe to my blog — it’s free! — by clicking on the three little lines at the top left of the page.