I’ve been waiting for this book to come into my library, but finally decided to just purchase my own copy as I wanted to share it with all of you as well as support those who have created it.
It is an uncannily-timed publication which will enable many of you to have helpful conversations about the war in Ukraine ( as well as anywhere else war rears its horrible head) and the impact it has on the millions who have fled their homes as well as those yet living in the war zone. 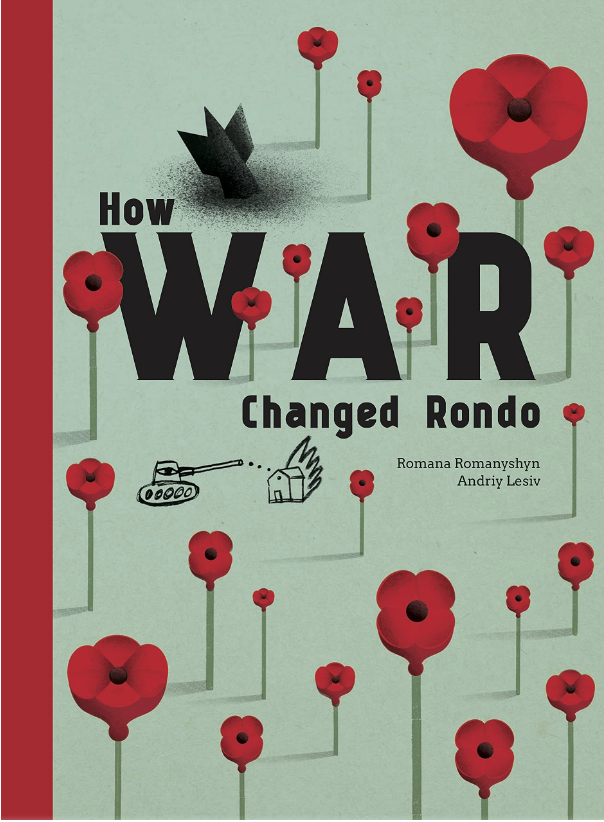 How War Changed Rondo, by Romana Romanyshyn and Andriy Lesiv
translated from the Ukrainian by Oksana Lushchevska
originally published in Ukraine in 2015; first English language edition by Enchanted Lion Books in 2021

Written and illustrated by a Ukrainian husband-wife time from Lviv, Ukraine, the impetus for this book was the outbreak of war between Russia and Ukraine in 2014. For eight years, Ukraine has been embroiled in conflict with Russia, including Russia’s annexation of Crimea and the battle over the Donbas region. So, although the brutal invasion that has recently taken place has awakened many of us to this tragedy, it has already been a long, painful road for Ukrainians.

All the same, when this book was being translated and released to an English-speaking world, I think no one could have imagined the scale of inhumanity that would be unleashed on the Ukrainian people. The fact that we have such a current, Ukrainian perspective on the impact of war on their homeland is a remarkable gift. The fictional town of Rondo is just the sort of place anyone would love to call home with its clear air, flourishing parks, and creative residents.  At the outset of this story, we meet three friends who live in Rondo, and discover the interesting, lovely ways they spend their days.

We also learn about one of Rondo’s most unique attractions — its famous singing flowers!

But abruptly, devastatingly, war descends upon Rondo. War destroys everything, silences the music, wounds the three friends and their neighbors.

How can they stop this War? What can they possibly do to counter it? Astonishingly, a discovery is made, a weak spot in War is found. The community bands together in an enormous stance of resistance which brings War to a stand-still.

Now recovery and restoration begin. Slowly Rondo starts to return to its old, familiar, gentle ways. Yet the authors do not allow the story to end in a naively benign fashion. “Not everything in Rondo could be fully repaired,” they acknowledge. Each person bears some sort of scar, holds some sorrowful memory. Rondo has been changed forever.

The story of Rondo is one simultaneously sobering and hopeful. The choice to employ non-human shapes for the townspeople and to describe fantastical features within the idyllic town blurs the realistic human element in such a way that it may buffer young children from an overly-traumatic impact. Nevertheless, the dramatic shift from a friendly, botanical, tea-and-crumpets scene to the ominous invasion of tanks and scary, ravaging, destruction conveys the reality of war like a punch to the gut.

Throughout, the metaphor of beauty in the forms of nature, music, friendship, light is used to showcase both the spirit of the people, the negative impacts of war, and the possibility of resistance and resilience. You will have to use your judgement, of course, but I would suggest sharing this book with children ages 6 and up. For those who are engaged with providing aid of any sort to refugees, my feeling is that this book offers an honest assessment of their heartbreaking experience without being too graphic.

In addition, Enchanted Lion has announced that all proceeds from website sales of the book will be donated to UNICEF’s relief efforts in Ukraine, for as long as the conflict is ongoing.  I’ve also provided a link below to Bookshop.org for those of you who would like to purchase a copy while supporting independent booksellers.