Every year I look forward to this opportunity to highlight new books about Martin Luther King and the struggle for civil rights in America.
Each title teaches me something new so even though they’re picture books, they’re perfectly suited to older children…or yourself!

A Place to Land: Martin Luther King, Jr. and the Speech that Inspired a Nation, written by Barry Wittenstein, illustrated by Jerry Pinkney
published in 2019 by Neal Porter Books, Holiday House

Focusing on the crafting and delivery of King’s iconic I Have a Dream speech at the March on Washington, Wittenstein moves beyond the basics found in many other picture book treatments of this historical moment, exploring the delicate messaging, the myriad voices advising King, the foundation of preaching and speaking he stood on, and the gut instincts that led him to heed Mahalia Jackson’s call to “tell them about the dream.”

Jerry Pinkney has surpassed himself with his artwork conveying strength of character, specificity of this historical moment, and a depth of warm humanity.

Within every great movement, far removed from television interviews and front page headlines, an army of individuals labor at the mundane. Making signs. Telephoning. And in the case of Georgia Gilmore, baking pies and cakes. 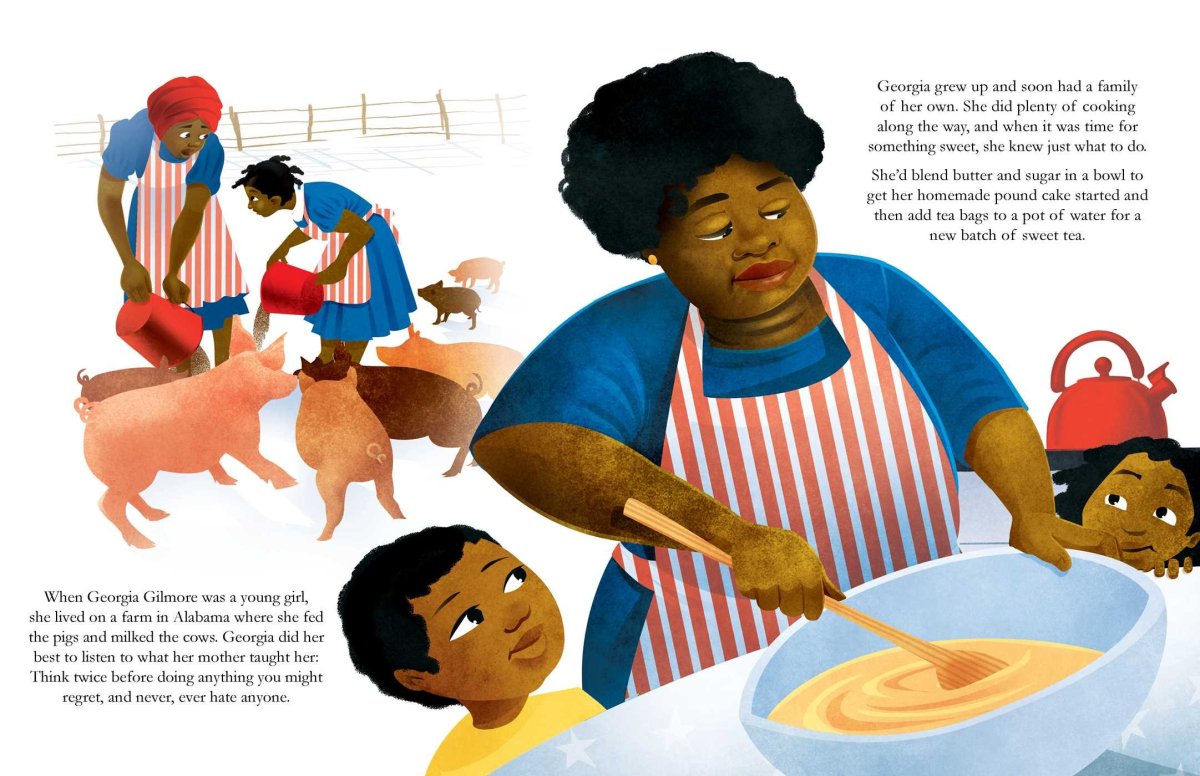 During the year-long Montgomery Bus Boycott, Gilmore and a secretive bevy of bakers raised critical funds to support those supplying gas and cars for workers. 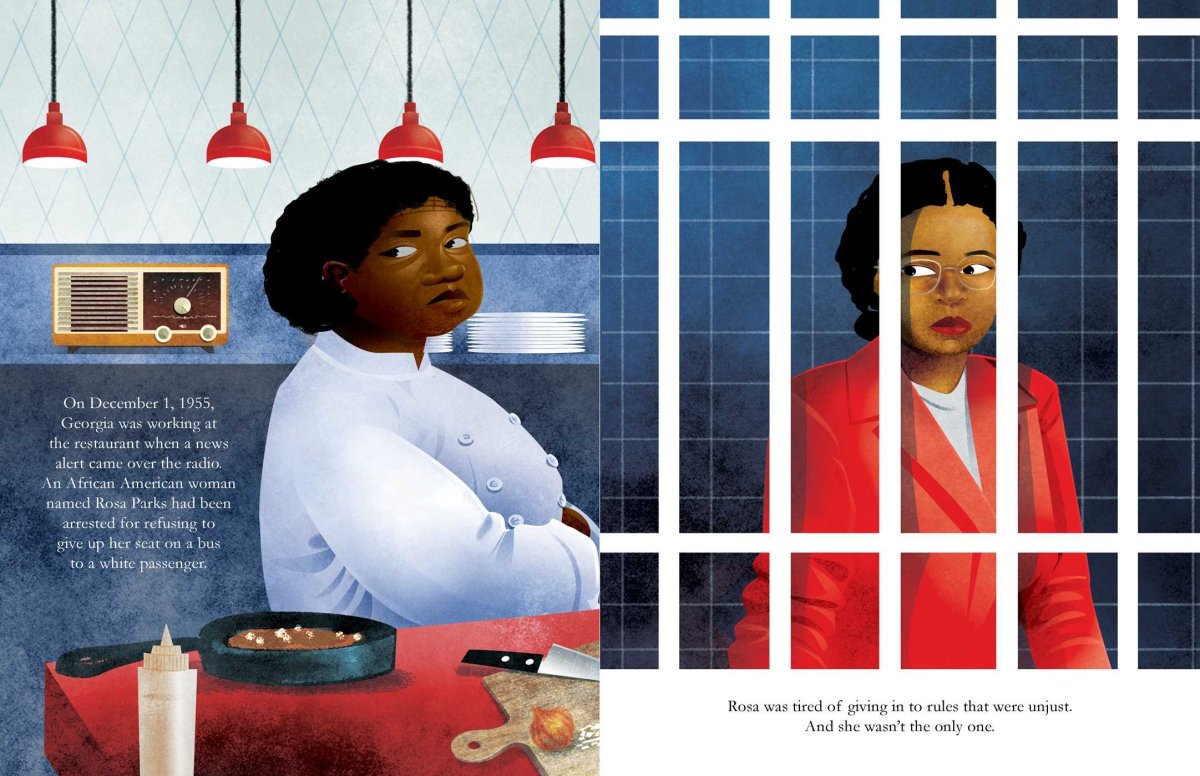 Read about this hero in the kitchen in this enlightening, upbeat account, complete with a recipe for Georgia’s Pound Cake. Ages 5 and up.

I was thrilled to see a new biography of this exceptional man, Supreme Court Justice Thurgood Marshall.

Winter’s punchy text takes us from Marshall’s childhood and the racial injustices he faced as well as his father’s deliberate prodding towards logical, sound argumentation, through his experiences as a lawyer fighting the most critical civil rights cases in America, to his appointment to the United States Supreme Court.

The struggle for civil rights has, of course, encompassed numerous populations, with many strong individuals playing key roles even though their names are not as well known as others. This bilingual account of the precursor to Brown vs. Board of Education of Topeka illuminates that beautifully. 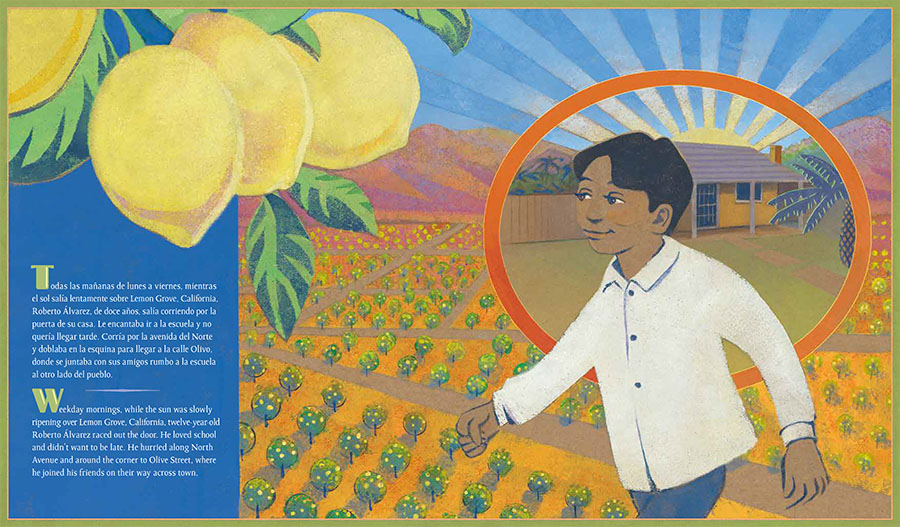 In 1931, the parents of Roberto Álvarez filed a lawsuit against the school board of Lemon Grove School in California after the board moved to segregate Mexican-American students from their Anglo peers. The Álvarez family was just one of dozens who banded together to protest this maneuver. Their story is a hopeful one of unified resistance to injustice. Ages 9 and up.

Twelve Days in May: Freedom Ride 1961, by Larry Dane Brimner
published in 2017 by Calkins Creek
97 pages

Brimner’s chronological account of the heroic Freedom Riders and the atrocious violence and injustices they faced won a Sibert award for nonfiction.

Steady pacing, narrative that pulls no punches yet reflects the stoicism of these nonviolent protestors, copious full-page, black-and-white photographs, and an accessible design using plenty of white space and large print, all create a compelling read for older elementary students through adult.

I browsed through the comments about this book on Goodreads and was astonished how many reviewers said they knew nothing about the Freedom Rides until they read this account.  This piece of our history, the courage of the riders, their non-violent stance and democratic agenda, and the brutal racism they confronted all need to be part of our understanding of society.

It’s an excellent read for ages 11 and up and a great choice for book discussion groups. You might follow it up with a fine piece of historical fiction about the Freedom Ride, Night on Fire.

And you can find lots more top-notch reads on Martin Luther King and the Civil Rights Movement, appropriate for a wide age span, on my Black History page here.