I have one more book to open your heart to the refugee experience, this time a short chapter book with a small heroine you’ll love.

The Day My Father Became a Bush, written and illustrated by Joke van Leeuwen
published in The Netherlands in 2010; first American edition 2014 by Gecko Press
translation by Bill Nagelkerke

Her name is Toda. Well…it’s not actually Toda, but in the new land she comes to, her unpronounceable name is changed to Toda.

She’s just a small child, living a quiet life with her father who is a pastry chef. “He got up at four

o’clock every morning to bake twenty different sorts of pastries and three kinds of cake.”

But her country is experiencing war, far off at first, then gradually creeping closer and closer to her home, until one day, her father sits her on his lap and tells her “that people were in no hurry to buy pastries anymore,” and he must help defend their land. Gran will care for her, and not to worry — he’s got a book with everything a soldier needs to know, including

This bush disguise is not truly effective for a dog. Hopefully it works better for Toda’s father.

how to disguise himself as a bush.

Soon, it’s not safe for Toda to stay at home, even with Gran there, and secret arrangements are made for her to join her estranged mother across the border. Toda’s journey as a refugee is baffling to her, as she blunders on her own from one strange situation to the next. It’s confusing, nerve-wracking, lonely, intimidating, even humiliating at times. I mean — what does a 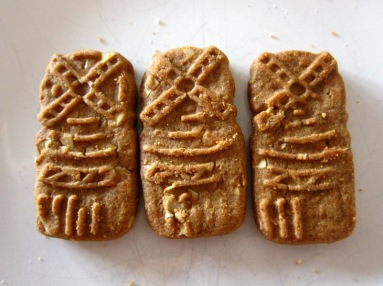 border even look like? A line drawn on the ground? A little hedge? How does one know when it’s been crossed?

Joke van Leeuwen has captured the naive, perplexing thoughts, emotions, and perspectives of a young child thrown into a muddle of partings, bewildering journeys, uncharitable strangers and kind-hearted ones, foreign languages, and government red tape. Through it all, Toda’s earnest, candid, gentle view of life and her devotion to her father, envelop the story in an atmosphere of innocence and hope.

Removing Toda’s story from any particulars of location and time gives an almost parable-like quality to it, and there is certainly much wisdom to gain from seeing the refugee experience through her eyes. I very much enjoyed this book. It’s about 100 pages and could be read aloud to children as young as age 6 or 7.