The Case of the Missing Moonstone (The Wollstonecraft Detective Agency No. 1), by Jordan Stratford, illustrated by Kelly Murphy
published in 2015 by Alfred A. Knopf

“‘Force…equals…mass…times…acceleration,’ muttered Ada as she wrote in her notebook…What if, Ada wondered…you could accelerate a sock? What if the sock were moving so fast that it could have the same force as a hammer? How fast would the sock have to go, and how could you make a sock go that fast?”

firecracker, who at this moment is puzzling out the engineering of a sock cannon. She’s a mathematical genius, a social misfit, and the daughter of Lord Byron, the English poet.

“Riding in a carriage unchaperoned was a brave and arguably rebellious act for a fourteen-year-old girl. Discovering a stowaway was another sort of adventure altogether. But arriving at the house of the great, mad, dead poet Lord Byron, to be tutored alongside an actual Lady, was almost too much to bear…This was a real adventure, with herself in a starring role. It was this, or the dreaded, confining, dull gray horror of “school” about which Mary had only heard from cousins.“ 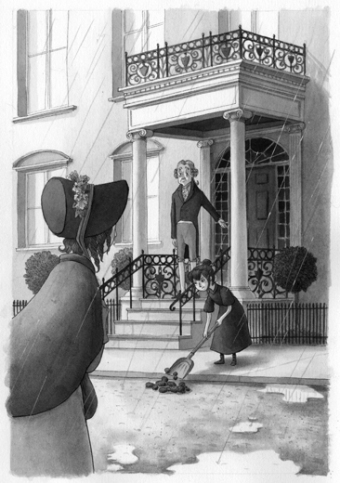 And meet Mary Wollstonecraft, who will grow up to write the most famous gothic romance of all, Frankenstein.

These two girls, whose true histories have been fictionally merged by author Jordan Stratford for the sake of this delightful new mystery series, are joined in this first volume by Percy Bysshe Shelley, Charles Dickens, and Charles Babbage, and plunged into a mystery liberally influenced by that great English detective story, The Moonstone by Wilkie Collins.

So, it’s a clever concept right from the start — incorporating historical characters, events, places, and a good bit of scientific thinking,  into an adventurous mystery well-suited to children ages 9 and up. It’s a great device to open minds to further exploration of these real-life figures. Beyond that, these female characters are strong, astute, independent — terrific characters in this zesty tale. 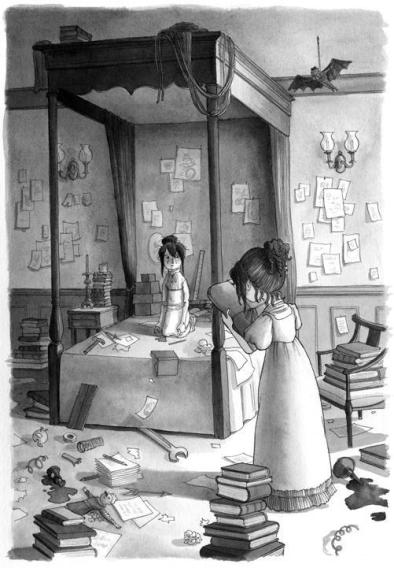 The girls, thrown together at the outset of this story, muse one day about criminals. They conclude that the criminals who get caught are not very clever, but there must be many others who are too clever for the constables to thwart, but no where near as clever as the brilliant Ada.

Why not form a detective agency? It would mean intrigue. Adventure. Secrets. Brain-work. Everything, in short, that these two crave.

The result of their advertising is the mystery/adventure of this book and it involves a stolen heirloom, a foray into Newgate Prison, three suspicious men in fezzes, and a heart-stopping hot air balloon ride…among other things!

If you’ve never read The Moonstone, you should! Monumentally great novel for highschoolers and older.

characters handsomely. Several pages of notes give historical facts about the year 1826 in which this book is set, eight true figures who appear in the story, and other historical references.

It’s great fun, and especially well-suited to girls ages 9 and up. A second adventure, The Case of the Lady in Gray,  is awaiting publication.