In honor of Columbus Day, this list of five is going exploring! 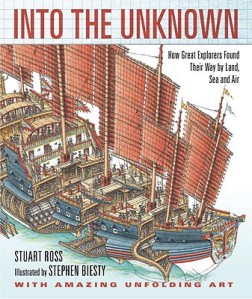 Into the Unknown: How Great Explorers Found Their Way by Land, Sea, and Air, by Stewart Ross, illustrated by Stephen Biesty

Here’s a dream of a book by an outstanding author/artist team that shows just how compelling nonfiction can be when it’s done right.

Stewart Ross narrates the accounts of “fourteen amazing journeys” spanning the years 340 BC to 1969 AD. Included are some lesser known, fascinating folks such as an ancient Greek explorer who meandered his way into the Arctic, and a Chinese admiral who sailed across the Indian Ocean exploring the African coastlands, as well as folks familiar to all of us such as Captain Cook, Leif Eriksson, Magellan, Columbus, and Neil Armstrong. 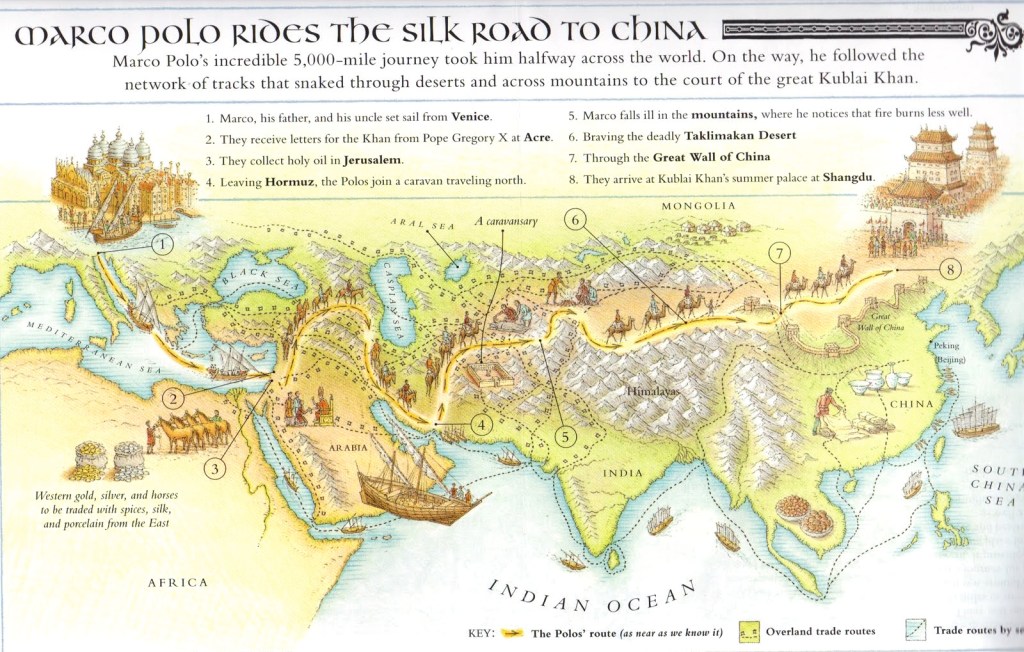 covered and the men (and one woman) who risked their lives to explore these strange worlds, attempt new methods of transport, reach beyond what seemed possible. He does this with extraordinary skill — unreeling vivid, riveting prose that creams along smoothly, catching us up in the adventure and know-how without  ever overwhelming us or stranded us on dry beaches of facts. This is nonfiction at its best. Ross maintains a positive tone throughout the book, focusing on the accomplishments of these explorers rather than critiquing their flaws.

Ross’ narrative is paired with Stephen Biesty’s incredible illustrations. Fold-out booklets are found in each section with beautiful maps and the stunning, detailed cross-sections Biesty is best known for. Many other insets along the way illustrate and explain navigational tools, methods of shipbuilding, silk production and much more. All this is set upon tantalizing backgrounds of yellowed parchment, musty notebook pages, lunar topographies, and so on.

It’s an extraordinary book, 85 pages long, which could be read aloud to curious kids ages 8 and up, or read independently by perhaps 10 or 11 and older. I very much enjoyed it and learned a lot about even the most familiar of the journeys. Highly recommended. 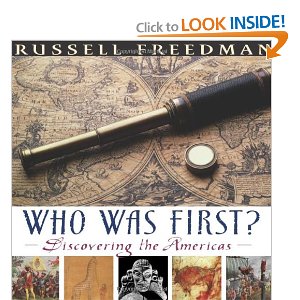 Who Was First?: Discovering the Americas, by Russell Freedman

One of my favorite nonfiction authors, Russell Freedman, has written this fascinating book, looking at  the various people who might be credited with “discovering” the Americas — North, South, and Central.

First comes the story of Christopher Columbus — the background to his voyages, his 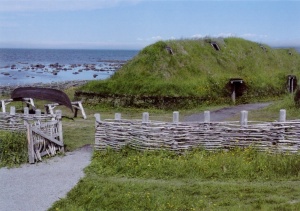 four trips across the Atlantic, and what he discovered in these unfamiliar lands. Next are chapters on Zheng He and Leif Eriksson. Freedman lays out the arguments that have been raised for and against the claims that these explorers reached America long before Columbus, and the evidence which indisuptably supports the Viking settlement. It’s a helpful look at dealing with conflicting historical theories.

Another chapter gives us an astounding glimpse of the various native populations that preceded any of these European discoverers, particularly the Iroquois Confederacy, the Aztecs, Incas, and Mayans. Freedman paints a rich picture of these complex civilizations! The book concludes with a survey of the theories currently being bandied about as to who first populated the Americas, how those people arrived here, and what archaeological evidence supports or refutes these ideas.

Freedman is a first-rate historian who provides well-documented notes and extensive bibliographical information for those who want to explore any of his topics further. His writing is dignified, vivid, clear, intriguing, and he never, never talks down to his audience. This is an excellent book for ages 11 or 12 through adult, about 80 pages long and liberally illustrated with handsome photographs and maps. 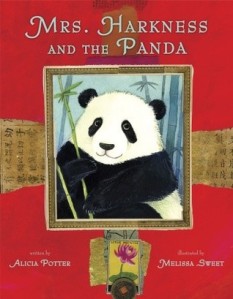 Mrs. Harkness and the Panda, by Alicia Potter, illustrated by Melissa Sweet

The first two books on today’s list are geared for slightly older audiences, but this one is a charming picture book that will capture the imaginations of ages 5 and up.

Ruth Harkness was a designer of tea gowns living in New York City with her cats. Such an unlikely explorer! Her husband, a wealthy adventurer, sailed to China in 1934, intent on finding an exotic creature — a baby panda — and bringing it back to the United States. Sadly, Mr. 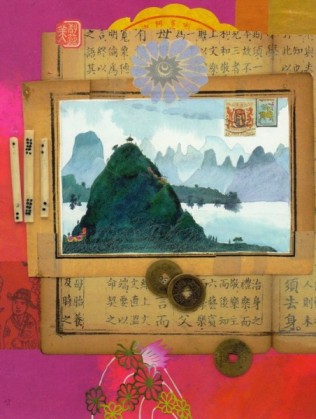 Harkness died in China, without having fulfilled his dream.

So, Ruth determined to finish the task herself. Her friends were aghast! Go to China?! Where you husband died??! But that is just what she did. And what an adventure she had, sailing across Oriental seas, packing her explorer’s kit, wending her way up the Yangtze River, walking, climbing, scrambling into the mountains in search of an animal almost no Westerner had yet seen.

A photo of Ruth Harkness, chronology of events, and an Author’s Note with a bit more about panda bears finish off this beautiful book, which I very much enjoyed. 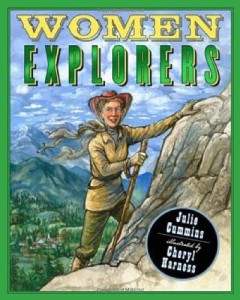 Of course, Ruth Harkness was not the only female explorer, but as Julie Cummins says in her introduction, just how many women explorers have you even heard of? Our history books have sadly left them out.

Cummins remedies this with her lively accounts of ten women, all born before 1900, who did not merely take tea!

Read about an Arctic explorer-photographer, and an incredibly tough, gold-digger; a botanist in the Amazon jungle, and a zoologist who survived life among cannibals; a mountaineering suffragette, and an explorer of Africa whose praises were sung by David Livingston; a Wisconsin farm girl who trekked into elephant territory, and a woman who made eight round-the-world trips; a nurse who fell in love with the desert sands, and an Aussie ethnologist who explored the Outback.

Zesty with details, each account is just a few short pages long, beautifully illustrated with Cheryl Harness’ remarkable paintings. As usual, Harness fills them with life and personality, period detail and geographical setting.

Cummins concludes with brief synopses of ten more women she had to leave out of her book. You will probably want to find out more about all 20 of these adventurous, courageous, stalwart women after you’ve read these astonishing accounts. 45 pages long, and suited to ages 9 and up. 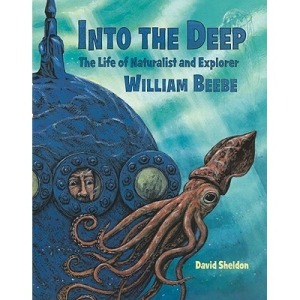 Into the Deep: The Life of Naturalist and Explorer William Beebe, written and illustrated by David Sheldon

One more picture book for the 5-8 year old set.

William Beebe was an American naturalist who fell in love with the outdoors as a young boy. His study of birds led to his job at the newly-established New York Zoological Park, now the Bronx Zoo, where he was admired by Teddy Roosevelt himself.

Beebe broke new ground in developing methods of observing animals in the wild, 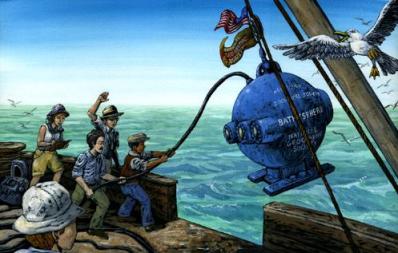 wrote such exciting books about his explorations that he became a household name in the 20s and 30s, and then turned his attention to exploring ocean life.

In order to descend deeper than any man had before, Beebe teemed up with Otis Barton to invent the Bathysphere. Using their new vessel, they undertook the first deep ocean descents, witnessing the mysterious creatures of those inky depths for the first time.

David Sheldon’s brief account trips lightly through Beebe’s life, hitting the high points of his many contributions to zoology, ecology, and marine science. His bold, strong illustrations in acrylic, gouache, and ink, bring a vivid, energetic quality to the story, while the underwater scenes gleam with mystery.

A final note gives more details about his career and a page of quotes from Beebe gives older readers a taste of his writings.

Categoriesnon-fiction, picture books
Tagscolumbus day, ecology, exploration, into the deep: the life of naturalist and explorer william beebe, into the unknown: how great explorers found their way by land sea and air, mrs. harkness and the panda, panda bears, ruth harkness, shipbuilding, who was first? discovering the americas, william beebe, women explorers: perils pistols and petticoats