Readers who have conquered early readers, but are not yet up to the challenge of a lengthy novel, come in different sizes and shapes. Some are 11 years old, having taken a slower pathway to reading, and they don’t resonate with the juvenile tone and subject matter of many early chapter books. Some are 5, voracious readers, tearing through challenging vocabulary, yet not ready for the emotional depth of many lengthier novels. Here are five slim chapter books to consider for the various needs of all these wonderful people. 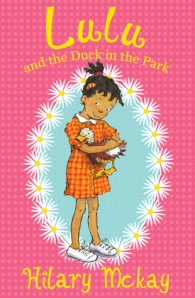 Lulu and the Duck in the Park, by Hilary McKay, illustrations by Priscilla Lamont

Lulu is gaga over animals. This is a girl who loves anything that breathes — even spiders! — and lavishes care on the ones lucky enough to meet up with her. Her teacher — kind-but-firm Mrs. Holiday — does not share her sentiments. At all. So, when Lulu tries to convince Mrs. Holiday they need more animals in their classroom, Mrs. Holiday puts her foot down decisively. No. More. Class. Pets. Or else!

Lulu really doesn’t mean to bring another animal into the classroom.  It’s just that when the class is munching their after-swimming snacks, and the unruly dogs wreak havoc in the park, and the ducks are scattered, and their precious eggs are broken, and Charlie’s nose starts bleeding, and one egg goes rolling downhill about to smash on a rock…well, 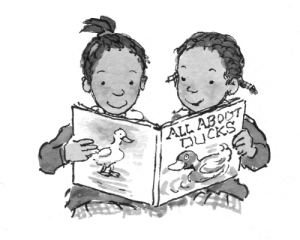 what else could she do?

Hilary McKay is the master of hilarious bedlam, droll humor, and warm, real relationships, and she has a knack of mixing them all together for a superb read. This book is the first in a series about Lulu, and it’s  an A-1 start.  Lulu is a likeable girl, full of spunk yet kind-hearted and aiming to please. The mixture of chaos and personality and teacher-speak in Mrs.Holiday’s classroom is a delight. It’s a great plot, paced perfectly, and readers will be eager for the next Lulu adventure (Lulu and the Dog from the Sea), which is now available on this side of the pond. There are a number of other Lulu books already in the UK and I expect they’ll keep them coming.

About 100 pages long, with lots of plucky, friendly, black-and-gray drawings by Lamont that capture the winsome Lulu and the emotional heart of the story, creating very inviting pages. I love Hilary McKay, and Lulu is another winner. 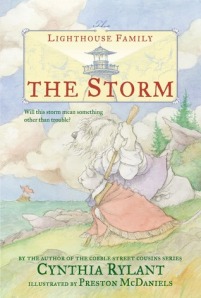 The Storm, by Cynthia Rylant, illustrations by Preston McDaniels

Pandora, a kindhearted cat, is a lighthouse keeper on a lonely, windswept island. For four years she has faithfully kept to her station, ringing bells, sounding the great fog horn, flashing the beam of light to warn sailors away from the deadly shoals.

Seabold, an adventurous dog, is a born sailor who’s been plying the seas solo for five years now.

With one magnificent storm, Seabold’s and Pandora’s lives are flung together. As the injured Seabold mends under Pandora’s care, he witnesses the vital work she does at the

lighthouse and decides to stay and pitch in. When another ferocious storm hits, the two of them team up in a gallant rescue…and get a much bigger reward than they’d bargained for!

This is the first book in the Lighthouse Family series, another one of Cynthia Rylant’s marvelous contributions to our library shelves. It’s chock full of the salty sea, with several dicey storms bringing a zing of adventure, yet centers on the dear friendship between Pandora and Seabold and the surprise additions to their household.

At 78 pages, it’s plenty long for a good plot, but not overwhelming. Rylant’s style and vocabulary are sophisticated here — this is not Mr. Putter!  McDaniels’ soft graphite drawings are beautiful and charming, taking up a double-page spread at the outset of each chapter, beguiling us with the whimsical lighthouse, and plunging us into the teeth of the storms.

A small, friendly house with a flowery garden crouches in the shadows of the towering apartment buildings surrounding it.  Who ever could live there?!

Nick and Maxine have just moved into one of those apartments, and have spied that house. Curious, and a little unsettled, they set off to meet the owner. When they arrive there, they are as astonished as can be!

Mrs. Noodlekugel — little and old and rosy-cheeked –keeps a remarkable cat who not

only talks, but serves tea and bakes delicious treats!  Four plump mice with poor eyesight also join them for tea, and assist in baking gingerbread cookies in a most unusual manner! And the cookies themselves? Well, as Nick would say it’s all “extremely entertaining — and weird!”

Daniel Pinkwater’s eccentric heroine has a bit of Mrs. Piggle-Wiggle to her, cheerfully living at the intersection of  jam tarts and magic. Readers will wish heartily that her house was just across the way from them, as they follow wide-eyed Nick and Maxine into her world.  At 72 short pages of nice, large print, generously sprinkled with jolly ink drawings by Adam Stower, this could be one of the first chapter books for a sturdy reader to tackle. A sequel is due out this year.

Mrs. Jane Tabby lives in an unkempt neighborhood, peppered with rubbish,  frequented by hungry dogs and fierce rats. Not really a safe place to bring up a family.

Happily, Jane Tabby’s four children all have wings! How her kittens happen to have wings, she cannot explain, but watching them fly and swoop about the alleyways, she recognizes they must take advantage of them and fly far away.

So Harriet, Roger, Thelma and James set off, searching for a new home. It’s a weary

journey, including a frightening encounter with an unhappy owl, but they finally find a most surprising, delightful refuge.

Published in 1988, this is the first of the four Catwings Tales by prolific fantasy writer Ursula Le Guin. These stories have a less juvenile voice to them than many early chapter books, as Le Guin matter-of-factly removes the kittens from home and mother, setting them on a perilous adventure of independence and new friendships. There is plenty of both tension and charm, but it’s not a humorous story.

Schindler’s masterful pen-and-ink drawings are detailed, sophisticated illustrations packed with gorgeous line and texture. Additionally, the print is much smaller than in many early chapter books. Some readers will be daunted by this; other’s won’t. The series is well suited  to older beginning readers and voracious young readers.

Beans on the Roof, by Betsy Byars, illustrated by Melodye Rosales

George Bean is astonished! His sister, Anna, is sitting up on the roof…and his mother has given her approval! The reason for this, George discovers, is that Anna is writing “a roof poem.” In fact, she’s hoping it’s chosen to be part of a book, in a contest at school. This would make her the first Bean ever to be in a book!

Before long, George, his other sister Jenny, Mama, and Papa Bean are all swept up in a wave of poetry-writing enthusiasm — writing on the roof, reciting in the kitchen! But…first George discovers it’s not as easy as it sounds, and then Anna has to cope with

a tremendous disappointment. The wonderful thing is, that through thick and thin, the Beans are there to support and cheer one another.

This is a funny, touching story, full of creative endeavor, immense kindness, and joyful family interactions. The Beans live in a brownstone apartment building in a working class neighborhood, with a Papa who gushes with love and pride for each one of them. The tone and characters, again, give this book great appeal for older beginning readers.

Here are Amazon links for these terrific early chapter books:
Lulu and the Duck in the Park (Book 1)

The Storm (The Lighthouse Family)

Beans on the Roof