It’s springtime on Trotter Street and everyone is thrilled to be outdoors enjoying their wheels — on skateboards or roller skates, pushing buggies or riding bikes.

Carlos and Billy are best buds.  They have bikes of their own, but they’re old bikes.  The boys look longingly at the big boys’ sleek new racing bikes.  Both of them decide that, with birthdays coming up, that is what they’re going to ask for. 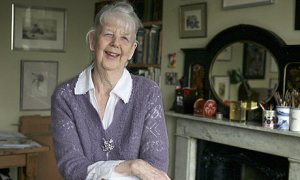 Unfortunately, while Billy does get his dream bike for his birthday, Carlos’ mom cannot afford one.  Even though Billy is kind enough to share his bike, Carlos is sick with disappointment, until…older brother Marcos saves the day with a superb, homemade go-cart.  Yes!  Now the whole story can cruise to a jubilant finish!

As with her fabulous title, Dogger, Shirley Hughes here writes a story in which the unselfish love of an older sibling shines out.   If you’ve read others of the Trotter Street collection, you’ll recognize a number of the neighborhood families on these pages; a nice familiarity.  I know I sound like a broken record, but…Shirley is the queen of children’s lit.  Don’t miss out!

The Glorious Flight: Across the Channel with Louis Blériot July 25, 1909, by Alice and Martin Provensen

Louis Blériot was an aviation pioneer who worked extensively on airplane design around the turn of the century, and who made history by flying across the English Channel in 1909, the first to fly across such a large body of water.

This is the matter-of-fact, up-beat account of his ventures, from the sunshiny morning

when he first gaped at an airship soaring over his little French village, through all his failed designs and accompanying broken ribs, to the brave, victorious flight over the Channel which won him  the prize for Perseverance and Valor offered up by Lord Northcliff of the London Daily Mail.

The Provensens won the Caldecott Medal for this very interesting book in 1984, with their lovely, primitive-style paintings.  The French towns and countryside, fashions and moustaches of this era, set the scene for extraordinary glimpses of Blériot’s ill-fated mishaps and magnificent achievements in airplane design.  The text is perfectly suited for young children; concise, yet full of intriguing detail. 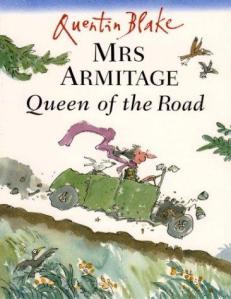 Mrs. Armitage: Queen of the Road, written and illustrated by Quentin Blake

Dear, eccentric Mrs. Armitage is at it again!

Having been given a hand-me-down car by Uncle Cosmo, she and Breakspear, the dog, set out to give it a whirl.

Before long, though…bing bong dang boing!  All the hubcaps are rolling down the street.  Mrs. Armitage gives them a glance, decides they’re not necessary, and chucks

them into the junkyard.  And on they go.

The next thing to go are the fenders, which lose in an altercation with some iron pillars.  Bumpers.  Hood.  And so it goes until poor Mrs. Armitage is driving a skeleton of a car.

Suddenly, around the bend roars Uncle Cosmo and his motorcycle gang.  They all think Mrs. Armitage has one fantastic, groovy machine, and proceed to outfit her with various odds and ends from their equipment to sort of zip things up a bit.  With her new brave pennant, leather jacket, and brassy horn, a very happy Mrs. Armitage now leads the gang;  indisputably the Queen of the Road!

Quentin Blake’s Mrs. Armitage books are favorites of ours.  Sure to brighten your day and bring a chuckle.  She is the loopiest, most endearing lady around, and her make-do-or-do-without attitude is optimism at it’s finest!

Sailing Home: A Story of a Childhood at Sea, told by Gloria Rand, illustrated by Ted Rand

Between 1896 and 1910, Captain Mads Albert Madsen commandeered the John Ena on 44 voyages, carrying cargo to ports around the world. On most of the voyages, his wife and their four children, Matilda, Albert,

Dagmar and Ena, accompanied him.

Based on the journals kept by Captain Madsen and Ena, Gloria Rand has told the story of their unique childhood at sea.  The John Ena had luxurious accomodations, with its  pink marble fireplace and plush furniture.  Yet life was one big adventure with the exotic pets picked up in the tropics, a rolling shipdeck for a playground, celestial navigation lessons with Father, and perhaps a family picnic in Japan when they happened to be there.

Of course, when a fearsome storm hits, things get a bit more dicey.

This is a fascinating account of the incredible, tantalizing, life this family led.  Ted Rand’s beautiful watercolors convey the delight of sunny days and the misery of storms, the childrens’ antics and the warmth of family, that were part of their days.  Black and white photos of the family and a lengthy afterword detailing more facts complete the book. 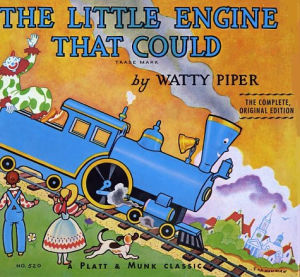 The Little Engine that Could, retold by Watty Piper, illustrated by George and Doris Hauman

Those brave words of the little blue engine, “I think I can, I think I can,” have chugged and puffed their way prolifically into our culture, so please, please, don’t miss reading this classic book with your children!

It all starts when the jolly red engine, merrily pulling its many carloads of toys and dolls, apples and oranges, bottles of creamy milk and yummy peppermint drops, suddenly stops!  And simply cannot budge another inch, try as she might.

All the dolls and toys are exceedingly sorrowful because unless this

trainload can make it over the mountain, the good little girls and boys on the other side won’t have anything delicious to eat or jolly to play with.  Oh dear!

One engine after another approaches, is hailed, and listens to the request:  please pull our train over the mountain.  But, to the dolls’ dismay, they all have an excuse.  One is too haughty, one is too important, one is much, much too tired.  Whatever will they do?!

Of course, when the kind but very little, blue engine comes, she agrees to give it a try.  She is afraid that she is too small.  But, she’s willing to try and s-l-o-w-l-y she succeeds in mustering her way up to the tip top of the mountain!  Hurrah!

A little moral tale about the can-do spirit.  How many times do we break out those cheerful words to encourage ourselves and our kids with tasks that seem daunting? The quaint 50s-era pictures by the Hauman’s are a big part of the charm. Don’t settle for any other version!

Here are Amazon links for all these on-the-go titles:
(As an Amazon Associate, I receive a small percentage of any Amazon item purchased after clicking through to their site from my blog.  Thanks to those of you who do!)

The Glorious Flight: Across the Channel with Louis Bleriot July 25, 1909

Mrs. Armitage: Queen of the Road

Sailing Home: A Story of a Childhood at Sea

The Little Engine That Could

Categorieschapter/middle grade, non-fiction, picture books
Tagslouis bleriot, mrs. armitage queen of the road, sailing home: a story of a childhood at sea, the glorious flight, the little engine that could, wheels