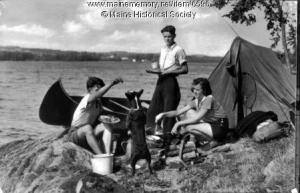 I’m taking a couple weeks of vacation from blogging, going up to the cabin and visiting my dad, so I’ve dug out some very summer-oriented posts from my archives to re-publish.  This one was originally published on July 12, 2010.

Our family loves to go camping.  Some of our best memories involve crackling campfires, toasty sleeping bags, bread-and-cheese lunches on high rocky ledges, night skies spangled with stars, and canoe paddles dip-dip-dipping along the trackless waterways of the Boundary Waters.  Here are five stories that capture the love of outdoorness and adventure and wild beauty that makes us ask every summer, “When are we going to go camping?!”   Whether or not you’ve been bitten by the camping bug, I think you’ll enjoy these, too.

Everything romantic about camping is squidged into this one small story!  Perhaps that’s why the words and images have swirled in my mind just about every time weve been out on the trail together for the past couple of decades!

Sophie is a little girl living in a big city. One day, as she and her dad gaze out the window at nothing but blocks and blocks of skyscrapers, he tells her, “It’s time to show you some real sky, Sophie.”  So Dad, Mom and Sophie pack up their knapsacks, hop in the car bright and early (equipped with hot cocoa and cinnamon doughnuts), and drive to the trailhead for Purple Cloud Rock.  Off they hike, along wooded trails, through flower-strewn meadows, to a pine-fringed lake.  Meals by the campfire, a rainy night in a snug tent, and a strenuous hike to the top of Purple Cloud Rock where “it feels like the top of the world,” round out this awesome week-end camping expedition.

Yes, I love this story.  Catherine Stock has illustrated a number of books and I always find her watercolor work so appealing.  The colors in this book glow with happiness and definitely communicate Stock’s own love for the outdoors.  This one is great for even very young listeners.

Three Days on a River in a Red Canoe, story and pictures by Vera B. Williams

Here is the first-hand account by a young boy of a canoe trip he took with his cousin, Sam, and his aunt, Rosie, and his mom.  It is a big adventure.  It starts with buying the tantalizing red canoe for sale in the neighbor’s yard, then equipping themselves with everything from dried apricots to life jackets to pocketknives, then getting up early and driving…a lot…this seems to be a theme with camping stories!…to the starting-off point.  The three-day journey on the river includes foggy mornings, waterfalls to navigate, rainstorms, wildlife spotting, and…one dunking.   In other words, it has its share of highs and lows.  But in the end, it’s all good, and the narrator of the tale goes to sleep back in his own bed, one happy camper.

The illustrations and clever graphic-design of this book add immensely to its charm.  It feels a bit like a travel journal, with colorful maps, a diagram of everything packed, illustrated guides to tying knots and laying a fire and pitching the tent, simple directions for camp cooking, sketches of wildlife spotted along the way, and vivid cameo pictures of the trip.  Vera Williams has said that she herself ventured on a 500 mile trip on the Yukon River and drew on her experiences to craft this story.  Her enthuiasm for adventure and discovery are obvious, even given the glitches she portrays as part of this realistic canoe trip. Great inspiration here!

The High Hills, story and pictures by Jill Barklem

Do you know the Brambly Hedge stories?  They come to us from Britain, where the incredibly-talented Jill Barklem spent years researching the natural history of the woodlands and meadows, as well as rural customs and crafts, before creating her exquisite, elaborate world for these little mice — the world of Brambly Hedge.  She began giving us these books back in 1980, taking painstaking care with the charming, miniature, lavishly-detailed illustrations, despite the fact that a detached retina made the work more than usually tiring.

Okay.  In this story, a young mouse named Wilfred yearns for the opportunity to travel to the High Hills and, hopefully, discover gold, just like the heroic explorers he reads about in books.  To his surprise, his mother agrees to let him accompany Mr. Apple, Lily and Flax, when they set out to bring the newly woven blankets up to the voles in the hills.  “It will do him good to be in the open air,” she says, as she packs him off.  The trip up to the voles’ cottage is not so difficult, but on the way home, Wilfred begs for the chance to scout around a bit, and reluctantly Mr. Apple agrees.  This exploring bit gets a mite tricky, however, when they are caught out on a narrow rocky ledge in some thick fog…and then get lost…at night…in the cold mountain air.  When Mr. Apple’s arthritis acts up, things look quite grey, until Wilfred comes up with a spectacular plan to get the two of them home.  It involves a raft.  And some rapids.  But I won’t say more.

As I said, Barklem’s illustrations are charming, gaze-worthy, beautiful.  A number of her Brambly Hedge stories are perhaps more suited to girls, but this one is definitely a Both-And.  It’s a longish story, requiring a good bit of listening, so it needs at least a 4-year-old or 5-year-old to enjoy it.   Our copy has quite a number of dirty little fingerprints smudging the pages as a result of so many listenings!

Henry and Mudge and the Starry Night, story by Cynthia Rylant, pictures by Sucie Stevenson

Here we have an I-can-read-it-by-myself book by the queen of story-telling, Cynthia Rylant.  If you have beginning readers, I am sure you are aware of this series.  “Starry Night” is the seventeenth book of their adventures!  I have no idea how many there are in total.

Henry is a capable 6-ish sort of boy, and Mudge is his massive, lovable dog, and the two of them are inseparable companions.  Every August, Henry and Mudge and Henry’s parents go camping.  They load up the car with the gear and…you got it…drive…to Big Bear Lake.  Everyone shoulders their packs, including Mudge, and off they go.  This is a painless camping trip.  Nothing really goes wrong.  They see waterfalls and wildlife.  They find a dandy camp site and roast hot dogs over the fire.  Henry’s dad takes out his guitar and sings sappy love songs and they all lie on their backs stargazing late into the night.  Just sheerly wonderful.

If you’re looking for a straightforward, happy story for your beginning reader, the Henry and Mudge collection is full of titles like this.  Cheerful pictures, loving family, big, slurpy dog.  You can’t go wrong.

My Side of the Mountain, by Jean Craighead George

I’ll include this novel in the list because it is the quintessential camping adventure!

I am on my mountain in a tree home that people have passed without ever knowing that I am here.  The house is a hemlock tree six feet in diameter, and must be as old as the mountain itself.  I came upon it last summer, and dug and burned it out until I made a snug cave in the tree that I now call home…It snowed all day yesterday and today.  I have not been outside since the storm began, and I am bored for the first time since I ran away from home eight months ago to live on the land.

This is Sam Gribley’s voice as he tells us how he ran away from his home in the city to live on some wooded land in the Catskill Mountains which his great-grandfather had purchased and abandoned long ago.  When Sam sets out, all he has is a penknife, a ball of cord, an ax, forty dollars, and some flint and steel.  Learning as he goes, often the hard way, Sam manages to carve out a life for himself, isolated in the wilderness he loves.  His chief companion is a peregrine falcon named Frightful, which he finds as a nestling and raises.  Several other animal companions, and just a couple of human visitors, make up Sam’s world for a year.   How will he ever find comfort in civilization again?

I think my son, Erik, must have listened to this book on tape a half-dozen times, relishing the high adventure of surviving in the woods by wits and sheer stubborn willpower.  It is a fascinating story, loaded with realistic details about the forest and Sam’s make-shift furnishings and tools, winning a Newbery Honor in 1959.  It has been made into a movie as well, but my understanding is that the film departs considerably from the book, as is usually the case.  Great read-aloud for ages 8 and up.

Categorieschapter/middle grade, early readers, picture books
Tagscamping, henry and mudge and the starry night, my side of the mountain, sophie's knapsack, the high hills, three days on a river in a red canoe