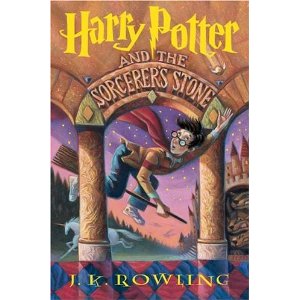 Harry Potter and the Sorcerer’s Stone, by J.K. Rowling, illustrated by Mary Grandpré

Harry had never even imagined such a strange and splendid place.  It was lit by thousands and thousands of candles that were floating in midair over four long tables, where the rest of the students were sitting.  These tables were laid with glittering golden plates and goblets.  At the top of the hall was another long table where the teachers were sitting.  Professor McGonagall led the first years up here, so that they came to a halt in a line facing the other students, with the teachers behind them.  The hundreds of faces staring at them looked like pale lanterns in the flickering candlelight.  Dotted here and there among the students, the ghosts shone misty silver.  Mainly to avoid all the staring eyes, Harry looked upward and saw a velvety black ceiling dotted with stars…
Harry quickly looked down again as Professor McGonagall silently placed a four-legged stool in front of the first years.  On top of the stool she put a pointed wizard’s hat.  This hat was patched and frayed and extremely dirty.  Aunt Petunia wouldn’t have let it in the house…
For a few seconds, there was complete silence.  Then the hat twitched.  A rip near the brim opened wide like a mouth — and the hat began to sing.” 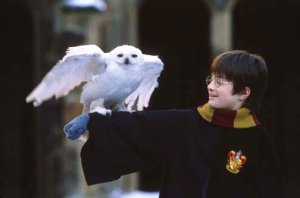 you access via that magical train platform, nine and three-quarters, where gleaming coins called Knuts and Galleons are the currency; a world where little Harry Potter, a scrawny, round-spectacled boy with a lightning-bolt scar, is called upon to be an epic hero.  And delivers!

You would have to live on the dark side of the moon, I guess, to not know at least something about Hogwarts and Harry Potter.  It’s been fourteen years since J.K. Rowling first introduced her endearing boy-hero and his fantastical world to us.  Today’s blog is a tip of my hat to this week’s opening of the final installment of the Harry Potter movie series.  In my household, this is a long-awaited moment, and I expect a lot of tears will be shed as that movie screen goes dark!

What is so magical about Harry Potter?

Rowling’s work has been mimicked endlessly since her wildly successful first book was published, but there’s nothing quite like it.  Her sheer ingenuity, inventing this world with all its enchanting quirks, the charisma of her characters, the deligthful fusion of a very British institution — boarding school — and a magical world of wands and hocus-pocus, the effortless flow to her writing, the heart-swelling warmth we feel for those who protect Harry, the classic ingredients of good triumphing over evil and the heroic quality of putting others’ needs in front of oneself…all of this comes together in Rowling’s spellbinding storytelling skills. 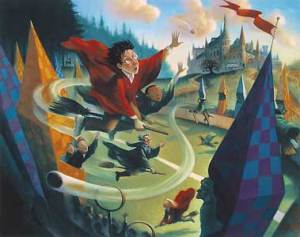 The result is thousands of pages in seven volumes which even elementary age children are not only willing to read, but tear through voraciously, hardly pausing to eat!  For my own son, who struggled heartily with reading, Harry Potter was the golden key that clicked in the lock of his brain, ushering him into happy fluency, and for that, it holds a very sweet spot in my heart!

If you’ve missed out on this grand series so far, do yourself a favor and pick up the first book this summer.  Immerse yourself in a fanciful land, with a little boy you’ll grow to love.  This first volume is well-suited to most children by age 9; as the series winds on, the scary factor increases, and sorrows, heart-wrenching but realistic in this world so touched by evil, will make most readers weep…so just be mindful how many of the books you hand over to a very young reader who gobbles up books.  Beyond that, jump on the Hogwarts Express and enjoy!